Scientists from RMIT University and Wuhan Institute of Technology demonstrated a next-generation optical disk with up to 10TB capacity and a six-century lifespan using gold nanoparticles.

The technology could radically improve the energy efficiency of data centers according to the researchers, using 1000 times less power than a hard disk center by requiring far less cooling and doing away with the energy-intensive task of data migration every two years.

The optical disk uses a novel nanoplasmonic hybrid glass matrix. Glass is a highly durable material that can last up to 1000 years and can be used to hold data, but has limited storage capacity because of its inflexibility. The team combined glass with an organic material, halving its lifespan but radically increasing capacity.

To create the nanoplasmonic hybrid glass matrix, gold nanorods were incorporated into a hybrid glass composite, known as organic modified ceramic. The researchers chose gold because like glass, it is robust and highly durable. Gold nanoparticles allow information to be recorded in five dimensions – the three dimensions in space plus color and polarization.

The technique relies on a sol-gel process, which uses chemical precursors to produce ceramics and glasses with better purity and homogeneity than conventional processes.

The researchers believe the new optical disk would be primarily used for “long data” – mining of massive datasets collected over decades and centuries. While the team says further work is needed to optimize the technology, they say the technique is suitable for mass production.

Polymer supercapacitors
Researchers at the University of Cambridge developed a new supercapacitor material by weaving two polymers together in a way that vastly increases charge storage capacity.

Conducting polymers, such as poly(3,4-ethylenedioxythiophene) (PEDOT), are candidate supercapacitors that have advantages over traditional carbon-based supercapacitors as charge storage materials. They are pseudocapacitive, meaning they allow reversible electrochemical reactions, and they also are chemically stable and inexpensive. However, ions can only penetrate the polymers a couple of nanometers deep, leaving much of the material as dead weight.

Scientists working to improve ion mobility had previously developed nanostructures that deposit thin layers of conducting polymers on top of support materials, which improves supercapacitor performance by making more of the polymer accessible to the ions. The drawback is that these nanostructures can be fragile, difficult to make reproducibly when scaled-up and poor in electrochemical stability, limiting their applicability. 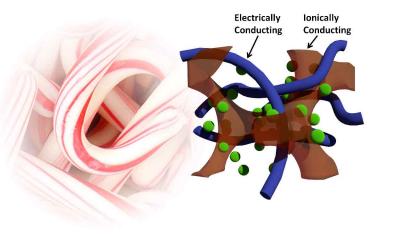 Supercapacitors woven like the red and white of a candy cane could have increased charge storage capacity compared to current technology. (Source: Tiesheng Wang/ACS)

The team created a more robust material by weaving together a conducting polymer with an ion-storage polymer. The two polymers were stitched together to form a candy cane-like geometry, with one polymer playing the role of the white stripe and the other, red. While PEDOT conducts electricity, the other polymer, poly(ethylene oxide) (PEO), can store ions. The interwoven geometry is instrumental to the energy storage benefits, according to Tiesheng Wang, a graduate student at Cambridge, because it allows the ions to access more of the material overall, approaching the “theoretical limit.”

When tested, the candy cane supercapacitor demonstrated improvements over PEDOT alone with regard to flexibility and cycling stability. It also had nearly double the specific capacitance compared to conventional PEDOT-based supercapacitors.

Still, there’s room for improvement, said Stoyan Smoukov, a researcher at Cambridge. “In future experiments, we will be substituting polyaniline for PEDOT to increase the capacitance. Polyaniline, because it can store more charge per unit of mass, could potentially store three times as much electricity as PEDOT for a given weight.” That means lighter batteries with the same energy storage can be charged faster.

The team layered platinum (Pt), tungsten (W), and a cobalt-iron-boron magnet (CoFeB) sandwiched at the ends by gold (Au) electrodes on a silicon (Si) surface.

The team discovered that they could flip the CoFeB magnetization in a stable fashion between the 0 and 1 states by sending only electric current through the Pt and W metal layers adjacent to the CoFeB nanomagnet. They did not need a magnetic field, as previous devices of this type required.

The researchers created “spin” current, electric current in which the spins of the electrons are pointing in the same direction. As an electron moves through the material, the interaction between its spin and its motion (called a spin-orbit torque, SOT) creates a spin current where electrons with one spin state move perpendicular to the current in one direction and electrons with the opposite spin state move in the opposite direction.

The resulting spins that have moved adjacent to the CoFeB magnetic layer exert a torque on that layer, causing its magnetization to be flipped. Without the spin current the CoFeB magnetization is stable against any fluctuations in current and temperature. This unexpected ZFS effect poses new questions to theorists about the underlying mechanism of the observed SOT-induced switching phenomenon.